The Crisis and us: What's within and what's without the current crisis in the Vacation Rental Market -or the uncomfortable position of the Little Ones

Over the course of the past 12 months I've been polling just above 200 among Property Managers and Channels about the current crisis in international conferences and gatherings. I've gotten started to the direction of some conclusions, although this is bound to remain food for thought rather than anything written in stone.

First of all an assumption though; all but a precious few (1.9%) have indeed confirmed a slowdown averaging just about -20% over the past 12 months (when the question was asked), especially among Property Managers it's been claimed the slowdown has been ongoing starting 2008.

Now a look at who is the 'ALL' that's been interviewed.

Property Managers (PM): Individuals or companies responsible for the day-to-day functioning of tens of pieces of real estate, in charge of advertising, collecting and depositing rent and communicating regularly with the property owner on the status of the property.
Direct Channels (DC): Businesses through which the property passes until it reaches the end consumer. Not to be confused with Indirect Channels, better know in our market as Channel Managers.
Please note that I've been strictly interviewing small to medium companies, which I consider to be the backbone of what used to be the Vacation Rental Market before the appearance of big investments in our field. More of that later. 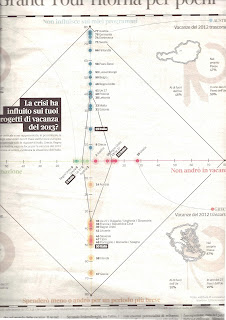 The Crisis Without
While talking to me many of the above mentioned just shuddered and said there was Crisis in the World and that explained about everything. Or did it?
I've been taking a look at the European Commission's

and other papers that establish that the number of leisure trips hasn't decreased in Europe's overall figures throughout the crisis, more details here. However it must be stressed that 36% of travelers travel as free guest ('visiting family, friends or relatives' see: here) and that package travel (33%) is growing faster than organizing travel plans separately (necessary for vacation rental online). On the other hand 46% claim information gathered through internet websites was most important when making decisions about travel plans (!) and 53% claim to have used the internet to arrange their travel plans.
This is not meant to say that the crisis hasn't influenced travel trends at all, since the poll shows 41% of people interviewed declared it did, nevertheless I argue that the world crisis is not key to explain the small/medium business' crisis in the vacation rental market. 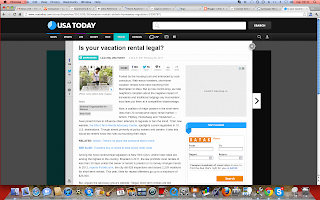 Some of us have been blaming the hotel lobby and it is reasonable to think that behind many anti-vacation rental laws there is their labour. It is also true that they have slightly shifted their product towards a more family friendly environment, maybe also to compete with vacation rentals. But if I may misquote a sentence of Larry Page, have you ever heard of a company shutting down because of legal disputes? Nope. Of course this doesn't help, but again, this isn't key to the crisis of medium/small companies in Vacation Rental. 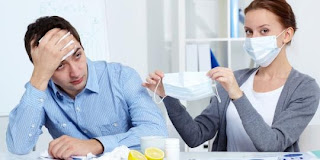 Oh, an by the way, the Vacation Rental Market as a whole is facing a slow down, right? Think again. It is not attending to PhocusWright that talks of a 'rebound' or if we look at what airbnb and the other behemoths are claiming (although this should be subject to further scrutiny, see our previous post 'Airbnb Vs Homeaway: who's winning the race?', another nice take is Estimize's eye.

So, let's face it, we've got to look for trouble at home it's pointless to search elsewhere.

A little history - Online Marketing
Back in 1997 when we got started with RomanReference.com it wasn't hard to market vacation rental properties, you pretty much just had to list on any search engine to be on the first page of results. That would take you travelers. In the old times we all felt like pioneers... But, hold on, who did?

Getting to the traveler was relatively easy online, while getting to the owners online was still near impossible. It was a time when finding the right owner was a problem and you had to compete elbow to elbow with brick and mortar agencies with a lot more experience and appeal. This has changed for the better now thanks to huge investments that improved awareness of vacation rentals in the general public.
Back to history, by 2002 organic competition had started to get a little stiff and there came Google Adwords, at an average 50c per click it would reward you with great conversions giving you a lead on the newly arrived organic competition.
Today's sponsored listing, at an average 3.5$PC on big cities keywords, has become almost unaffordable for channels or PMs that don't earn the full rental revenue and/or can scale with thousands of destinations worldwide. CPC has gone up almost 10fold, while conversion rates have gone down, to the best of our knowledge no matter how good you are Adwords will cost you ~18% of total revenue. To make things worse google adwords does not let you target long tail keywords anymore putting the small operations totally out of reach. True, there are new players such as MSN, Yandex, etc, but they're still too small to matter on sponsored ads.

What happened? Or The End
Since 2011 just short of 1Bl of dollars (see dedicated VRmintel article on venture money in the vacation rental market and consider they have forgotten at least 200$mil with Wimdu and 9flat and Billy+many undisclosed investments) have been invested in online vacation rental via venture capital, stock market and big company investments. These investments have outplayed the small operations online both organically (unless they use shadow or black hat techniques) and sponsored. At the same time have put a very heavy weight on commissions, pushing them down from an average 30% to an average 15% (do the math with my above findings if you want to make a ROI out of your next SEA campaign).
It must be said though, that not all the investment has played against the little operations in the VR market. A growth in awareness, see above, has brought about a great abundance of properties and travelers.
For old timers like me it's like having grown up on the tip of a dune in a desert where every once in a while it used to rain enough to drink aplenty all year long. Now the desert has been flooded with salty waters and we're just standing there, surrounded by the very thing we've been craving for for so long. Only unable to drink it.

What's left?
Oh well, we just need a desalination kit... or good communication.
Thankfully over the past few years a lot of Direct Channels have sprouted out, most of them are free to PMs. These are now getting together (see the Switch or Rentals United) or getting managed by Indirect Channels or Channel Managers (see Kigo). The future of small operations is here, like little bridges that link those tips of the dunes, so we can share the little drinkable water spilled by them behemoths hovering high above our heads...

A little pride, c'mon!
That is unless... you come up with a couple of tricks, I've got a couple of ideas, but we better talk about it in person. I plan to be voicing them on a brain tempest taking place in next VRMA European Seminar, Dec 9 to 11 2013, in Bruges Belgium. See you there!